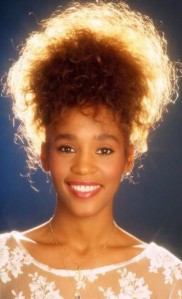 It’s been a year since we lost my beloved Whitney. I still remember where I was: on the couch, preparing for an ill-fated date. I tried not to be upset as I had to be engaging and entertaining. When Michael died, I took a weekend to grieve properly, absorbing video marathons, poring through photos online, wishing he was at peace. I couldn’t do that for my Whitney. Instead, I was forced to push on. This is one of those days that the rituals of being a single woman are exhausting. The fact that my date dismissed Whitney in favor of the so-called better artist of Beyonce made this date pointless in hindsight. I like Bey, but no.

I had been worried for her all winter. I saw Whitney post-filming of Sparkle and she looked puffy. I wondered if she relapsed and began a drug withdrawal protocol. Familial experience gave me the knowledge that medical withdrawals pack on the pounds. I figured she was surrounded by triggers and was concerned. Of course, that I don’t intimately know her proves my ultimate fandom. She had been filming a movie, experienced an unsatisfying tour and re-promoting herself. This is a lot of stress for a woman I rarely saw happy.

I had to be 8 years on when I discovered Whitney and instantly fell in love. First, it was the mid-80’s and young Black women were rarely seen on television. People may not remember this era but before the Cosby Show, there wasn’t a huge glut of Black female faces in culture. Black men, yes. Women, no.  My first attention revolved around Diana Ross and loving her Central Park concert film, which was shown on syndication often. However, Diana was old, well older than my mother and not particularly relatable. Then Whitney arrived, tall, gorgeous (people often forget how beautiful Whitney was as it became so secondary to her talent) and could sing SING. Not that female singers then couldn’t belt out a note. But she could stand assuredly and sing so effortlessly. Nothing short of amazing. I fell so deeply in love the moment I saw her. It would never be the same (though I just quoted a Mariah lyric there).

I remained truly devoted. I forgave her ridiculous wigs, which had a tendency to minimize her beauty. Maybe that is why she relied on them so heavily. I shrugged off critics that wrongly claimed her music wasn’t soulful enough. I have never been one who thought that emotion outranked vocal ability, which is probably why I was never a huge Mary J Blige fan. She was no my Whitney. I decided to dislike Diana Ross, because Whitney mentioned that she was mean to her while she was starting out. Whitney liked Aretha. I liked Aretha. I boycotted the Soul Train Awards when she was booed. Forget them, for not recognizing true talent, beauty and poise.

While exceptionally accomplished, my Whitney always possessed an edge in interviews. She always needed to defend herself against those who said that she couldn’t dance (she couldn’t, but really?), she wasn’t down (she’s from Newark, home of scary Blackness), she was manufactured (as the best singer bot ever and that sounds awesome!).  I noticed inklings that she wasn’t squeaky clean: rumors of an affair with Jermaine Jackson (Whitney always had terrible taste in men), fights in clubs, arguments at football games. I knew that’s what the record company was hiding, her rawness. Maybe the requirement to smooth those edges got to her. We will never know.

When she passed, I didn’t cry. I didn’t cry when I watched the funeral. One of my mini Twitter rants from two years ago, was the fact that I never hear Whitney songs on the radio. Yet, I hear Madonna songs and I didn’t like it. So one day, four-five months after her death, I heard two Whitney songs on two different stations while driving and I sobbed. A true, all out bawl. Goodness, my icon. The first true love of my little girl heart was gone.

I wanted such great things for her. I wished that she got away from fame and drama for a while to seek peace. I never truly abandoned her, just prayed that she got it: who she was, who she didn’t need to be. Find the safety in the knowledge

of what she could and couldn’t control. Her chaos (I completely forgot her messy her union with Bobby was until a read a rerun interview with Vibe from the mid-90’s) could easily be discarded for quiet. I still recall an interview with Oprah, while Mariah Carey gazed at her so lovingly, she admitted that she was lonely. I wanted to run around and get her somegreat friends. When I saw her that atrocious Being Bobby, I saw glimpses of her funny, fierce, phenomenal self and I hoped that those moments of her could become more frequent. I never made jokes about the substance abuse. It’s an easy vice that becomes all consuming way too quickly. What I wished for her is that she could always stand still and sing effortlessly, leaving all of the lessers behind.

2 thoughts on “Loving You, Losing You”