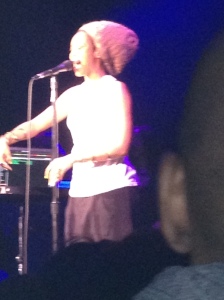 Last week, I was blessed with seeing Ms. Badu. Anyone who follows Erykah Badu regularly knows that her concerts constantly surprise. Last summer, when I saw her at the Summer Spirit Festival, she appeared irritated and sang no radio hits. She stuck mostly to the Worldwide Underground, my personal least favorite album, and Mama’s Gun. People wanted to hear Window Seat and other more recent work. Folks were disappointed. I wasn’t completely. Only because every time I see Badu, it’s an adventure.

My first time was in 2001, fresh from Mama’s Gun. We went Baltimore’s African American Heritage Festival, where she was the headliner. My friends disliked driving everywhere and insisted that we take the train. Plus, it was a Friday night and there was traffic to consider. My have times changed. Her show started late and we only had about 15 minutes to see her before we needed to catch the train. Luckily, we heard a few songs including my beloved Otherside of the Game. This no-driving plan turned out disastrous. We purchased the wrong tickets back to D.C. Thus, we each had to either pay an extra $30 to board the train or be stranded. Fortunately, my girlfriend was one of those women (not like me at all) who could charm a man into anything. Therefore, we ended up riding free on the next train. Through all of this drama, I kept thinking that I wish I was back at the Erykah show, can I rush back to the Erykah show. I was in love.

True confession: I didn’t own Mama’s Gun until about 2008 when I picked up the CD for $6 at a going out of business sale for a failed retailer I don’t remember: Tower, Circuit City, whatever. These things blend. My friends were incredulous that I didn’t love that CD. It was the best thing in human life according to them and I finally admitted that I didn’t own the CD. The problem lied with Bag Lady. Anyone around in summer of 2000 knows that song was a breakout hit. Radio stations and video channels played it incessantly. The song was background music in every restaurant, bar, lounge and I absolutely hated it. It caused mixed feelings. I wanted Erykah to have success, but with that song. Ugh. Anyway, I wrongly figured that song represented everything else on the album. It didn’t not and I found out eight years too late.

When she announced the tour of revisiting previous work, I was conflicted. I didn’t love her previous show and needed good mood Erykah to make effective use of my money. I’ve never seen her in a bad mood (just irritated) but those that have are scarred for life. I wanted intel on how the concerts were progressing before purchasing. Erykah makes me irrational. My favorite song is Otherside of the Game, but my anthem is Cleva (story of my existence). I couldn’t decide which show to see. With all of the vacillating, it was decided for me. The Friday Mama’s Gun show sold out. Baduizm it would be. I re-listened to Baduizm several times to prepare. I forgot how much that album takes me back to one of my favorite years. I swear 1997 was one of the best years of my life. I spend so many nights listening to that CD in my dorm room while completing assignments since my university refused to give students the basic human right of cable. Therefore, I only got about four channels on a regular basis. I was set for the nostalgia and what great nostalgia it would be.

I was ready for the show as I don’t get excited. I won’t mention the cramped conditions of Fillmore. I don’t understand how the venue skirts around fire code violations as I think there were about 300 too many people in the space. We were shoulder to shoulder and I couldn’t move my arms. Nonetheless, we had good mood Erykah that night. She even made jokes. The surprising thing about the concert was how straight forward it was. When I saw her a few years back, she sang Apple Tree as a reggae/ska song that forced the audience to listen closely for identification. The show had few remixes, even though that word minimizes what she does. She merged On and On with Mama’s Gun …& On. She turned my adored Otherside of the Game into a spiritual, trance experience with the addition of echo machines and primal screams. Other than a few gospel-tinged elements, she executed each song flawlessly as heard on the CD. For the uninitiated Erykah attendees, it may have given the wrong impression. Those folks might expect simple, great performances in the future and that’s a set-up for failure.

However, the encores killed my worry. First, she did a cover of Chaka’s Stay, but not just Stay as she weaved in elements of other songs. Then Didn’t Cha Know which she merged with Believe in Yourself from The Wiz. That was the kind of awesomeness I truly expected and makes me a believer. I didn’t want to leave. I saw someone selling tix to the Mama’s Gun show on Twitter and almost copped them. Then I remembered that I had visitors in town and, you know, I should be around. That’s what Erykah does to you. You only think of her and nothing else. Nothing else.

One thought on “The Badu Edition”