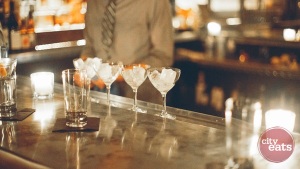 So the hottest thing going for the last several years—look I never said I was ahead of the curve, I just ride waves as they are about to pass—are speakeasies. It all started with PX in Alexandria and several others have arrived since then including The Gibson and The Columbia Room. Recently I visited Harold Black in Capital Hill to experience the mystery and wonder of it all. Most of the bars require a reservation and a deposit, which are hard to come by at the last minute. I decided to do this on a Thursday for a Saturday. The Columbia Room actually is a prix fixe tasting room, which seemed pricey for no reason.  So I made a reservation for Harold Black and the only reservation was for 11:30 p.m. but I am excellent at talking my way into most places, so I was undeterred. We arrived at 10p. and I convinced the door man to let us in. Hey, we had a reservation, what could be the problem? To describe the beginning…so the spot is unmarked above a restaurant. I went into the restaurant to figure out how to get there. We were told to go around the side, walk up the stairs and knock on a barn door to enter.

First let me say the place was sexy. It was dark (in a good way), secluded (yay, no aggravating drunk people!) and exclusive. A group of annoying bar hoppers tried to enter without success. The snobby yet nice (this is a weird trick that the entire staff pulls off) brushed them aside and told them that the spot wasn’t open to just anybody.  The point of these places is that you get above the top custom cocktails with housemade ingredients and premium spirits. My first drink was something off the menu. I liked it but really wanted some made especially for me. As I am important. The bartender asked me my favorite drink –whiskey sour—and flavor profile—tart and dry. Then I received it— he called it a Brooklyn Sour. I was so in love. I wanted to savor every drop. So the bar has a $35 tasting prix fixe menu with two regular bar items, two custom drinks and an appetizer. It seems extravagant at first blush but would have been cheaper than my three $12 drinks and one $7 appetizer. Despite the cost, it was a great night. The bartenders gave us samples of custom cocktails that he made for other patrons. We chatted with a nice girls night out duo. But the real deal are the cocktails…yum. And the dimly light seclusion—again, sexy. That made it fun.